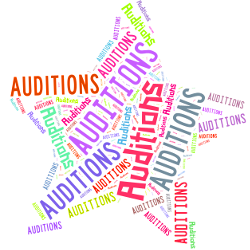 Well we're auditioning again for our summer show, and as you may have heard, there's been a little bit of a change of plan to what we'd originally intended.  However we're sure that we've got a great show lined up, in the form of two back to back one act plays from "Little Grimley".

So WE NEED YOU - calling all our theatre club members - and anyone wishing to have a go for the first time, we're auditioning for parts for this summer show.  This is a great opportunity for our cast, both old and new.

Come along to the auditions on Tuesday 18th March or Wednesday 19th March at 7.30pm at the Village Hall.  No audition no part we're afraid!

LAST TANGO IN LITTLE GRIMLEY
Little Grimley Amateur Dramatic Society is in trouble. The membership has dwindled to four and the audience isn't much bigger. If they don't come up with some rent money soon, they're going to be thrown out of the village hall. Gordon, the chairman argues that there is only one thing that sells tickets these days SEX. Thus begins the chaotic and hilarious build-up to an evening of extraordinary home grown drama.... an evening the locals would never forget!!!

LAST PANTO IN LITTLE GRIMLEY
"Last Panto" is the first sequel to "Last Tango" and sees the four club members - Gordon, Margaret, Joyce and Bernard - tackle the xmas panto with predictably hilarious results. Gordon is again 'in control' and produces an adult script for Puss in Boots to attract the audience. Unfortunately he hasn't reckoned on a faulty word processor, less than state of the art lighting or Bernard's banana habit to prevent things going as smoothly as he would like.