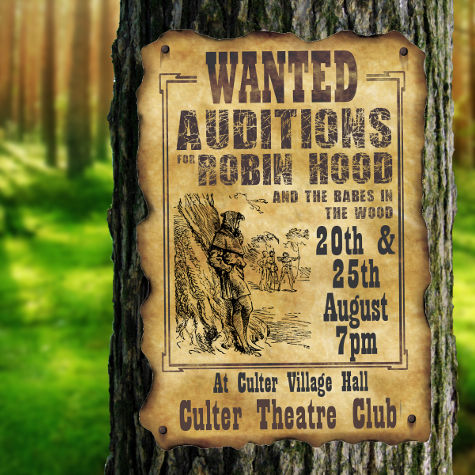 PLEASE NOTE - THE AUDITIONS FOR TUESDAY 25th AUGUST have been POSTPONED until THURSDAY 27th AUGUST due to an unforseen emergency.

Ever thought you'd like to have a go on stage?  Well now's the time to come along and show us your stuff.  This is Culter Theatre Club's 25th Anniversary Panto - and we're going right back to our roots with the Panto that started it all Robin Hood & The Babes In The Wood.  We've got great plans as always for the show, and whether you want one of the main parts, a supporting role, or just to be one of our great chorus, young or old, we'd love for you to come along.  So add the date to your diary today:

Excerpts from the script, songs and dances will be available on the night (you don't have to memorise anything!).

So come along and let us see your talent to celebrate 25 years of CTC!

As well as our performers on stage, putting on any show takes a huge amount of effort from the people working behind the scenes.  From lighting and sound, to costumes, set, props and more, there are a whole load of different things to get involved in.

If you'd like to get involved we'd love to hear from you!  You don't need any experience - just enthusiasm to help out, and if you're interested in some of the more technical aspects of the show, we'd love to show you the ropes there too.

The Roles for Robin Hood & The Babes in the Wood

In case you weren't sure, here's a list of the main roles being cast - as well as the oodles of folks we need for the chorus as well of course!