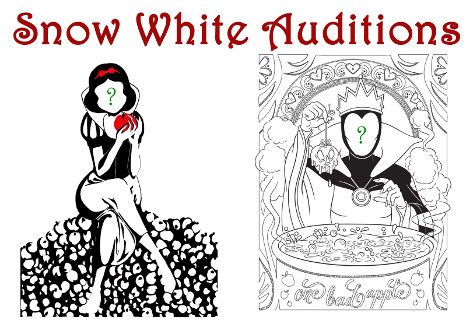 As we've had so many fantastic people audition for parts, and due to time constraints with other shows going on just now, we'll be informing people if they have a part by email over the next couple of days!  If you haven't heard by the end of the week let us know.

This year our Christmas panto will be "Snow White", and that means it's almost time to get started with rehearsals!

Ever thought you'd like to have a go on stage? Well now's the time to come along to the Snow White auditions and show us your stuff. As ever, we've got great plans as always for the show, and whether you want one of the main parts, a supporting role, or just to be one of our great chorus, young or old, we'd love for you to come along.

Excerpts from the script, songs and dances will be available on the night (you don't have to memorise anything!). There are parts to suit everyone!

Want to help out backstage?  Come along and introduce yourself on one of the audition nights, and let us know what you're interested in!